A bio-engineered alien spider that escapes from a military base and the City of Angels – what better basis for a movie described as seriously good and seriously funny.

Premiering at SXSW last year, Big Ass Spider has crawled its way into the hearts of film lovers.

Despite the might of the US military, the city of Los Angeles is on its knees and at the mercy of this fast moving, fast growing, venom spewing, bad assed arachnid. So who you gonna call? The local exterminator, of course! Armed with attitude, rifles, shotguns and a rocket launcher, Alex and his sidekick, security guard Jose, are out to take down this creepy crawly and save the world. Can these unlikely heroes save the people of LA before it’s too late? Watch the movie to find out.

This movie will trap you in its web and give you a heaped serving of belly laughs with a side of gore. If you’re a lover of creature features – you’re going to love Big Ass Spider in all its glory. 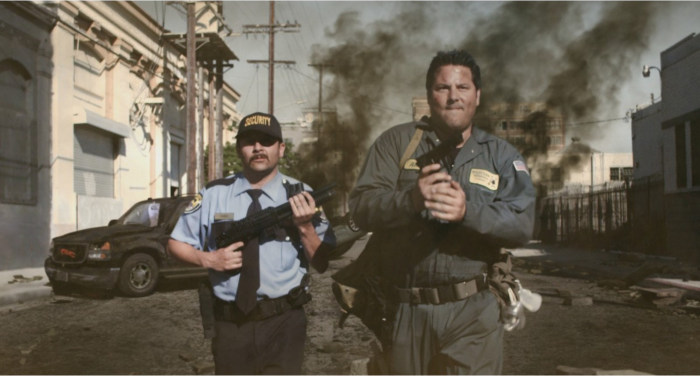 Holding a 78% approval rating on Rotten Tomatoes, Scott Foundas of Variety called the film, ‘an exceedingly good-natured Z-grade creature feature’ and that ‘many worse ways to spend 80 minutes can easily be imagined’.

And last but not least, John De Fore of The Hollywood Reporter said, ‘Mike Mendez’s shamelessly Corman-esque Big Ass Spider does almost everything just a tiny bit better than it needs to’.

Things you might not know about Big Ass Spider:

How to see it:

Big Ass Spider is available on DVD and Blu-Ray NOW  in our Shop for the best price on the net with fast ass shipping. Add this one to your collection for a great night of belly laughs with friends.