Features, Interviews, The House of Monster

Mick’s outta the cage: An Interview with John Jarratt

Only John Jarratt could compare the horrors of Mick Taylor’s limb-slicery to the majestic waves of high tide Bondi Beach. It sounds like an impossible metaphor, but hearing it via Jarratt’s surprisingly soft-spoken eloquence, it makes sense. Jarratt suggests rough waves, like the Australian outback, contain as much magnificence as dread. And that there’s something innate in all of us that wants to take a closer look.

We’re drawn, as audiences, to what we fear. Jarratt’s film, Wolf Creek [2005], exemplified this by creating its own waves at the Aussie box-office bringing a profit in excess of $25 million worldwide, and becoming a talking point for filmgoers and outback travellers ever since. Jarratt’s infamous character in the film has become somewhat of a figurehead for what to avoid when on the Aussie road. The film featured a group of naïve backpackers making their way across remote Northern Australia whose journey takes a gruesome turn when they run into Mick – a pig-shooter who don’t take too kindly to interlopers. In the film’s sequel, we see a different side of Mick. He’s still slicing limbs, but this time, he’s found an adversary not so easy to exploit.

Ego plays a part in this one, as Mick goes head to head with British traveller, Paul (Ryan Corr), in a cat’n’mouse game that finds our anti-hero requiring extra jaunt in stalking his prey. Paul’s not going down without a fight, and in that the film offers something of a change-up. Mick’s suddenly got a fight on his hands, and through the blood and muck and the scrub, he takes poor Paul to his limits while testing a few of his own.

What is it that we love about a guy like Mick? John Jarratt recently helped Monster get to the bottom of that conundrum. Wolf Creek 2 is out of DVD and BluRay now through Roadshow.

JARRATT: Ooh, I don’t even think about it. That’s up to you guys. I do like the idea of people watching and saying [referring to the film’s gruesome opening scene invovling two officers], “Hey, yeah, give it to the cops!” And then going, “Oh my god, I’m actually going for this guy!” The darker side of you says, “Yeah, give it to the cops!” But then you think to yourself, “Maybe I shouldn’t be thinking that way”. Scorsese is very good at that. Remember, in Goodfellas when they’re jamming the guy back in the boot? It’s a very funny scene, and you’re laughing, but then you think, “Hang on a minute, I shouldn’t be laughing at this”. 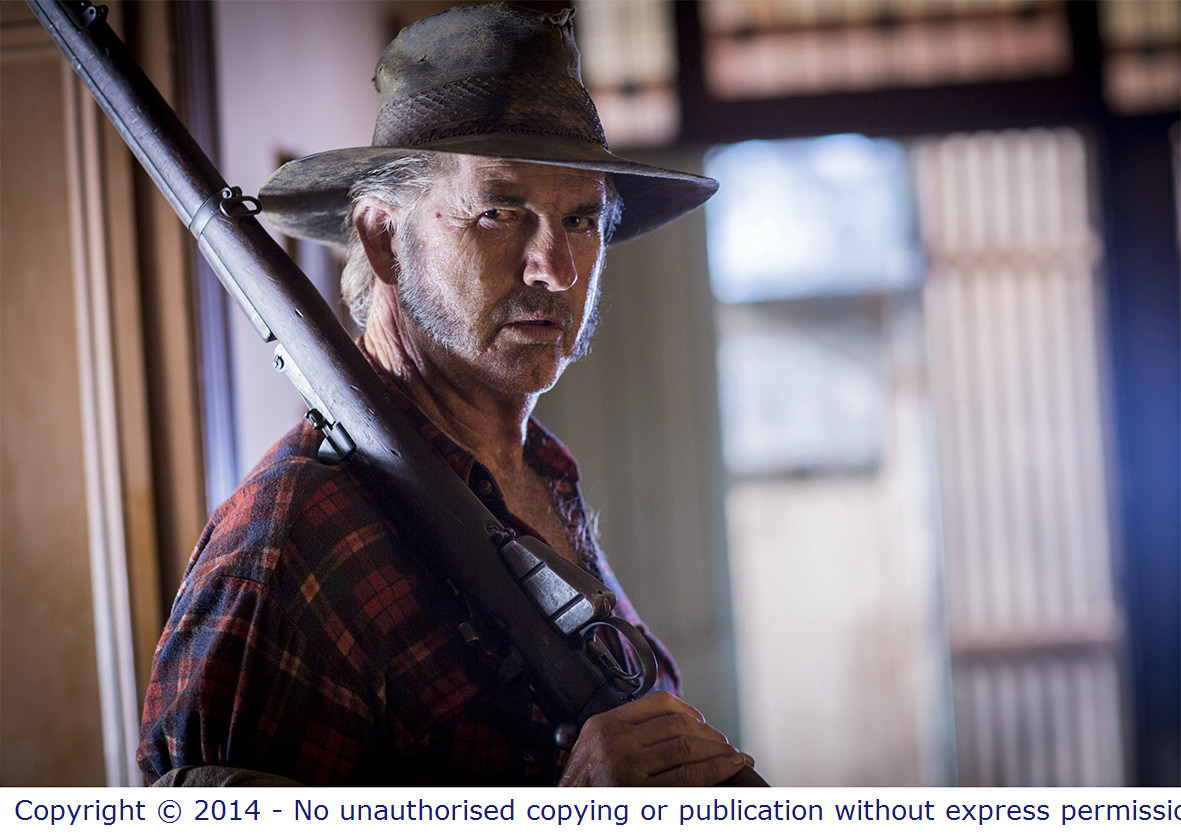 MONSTER: Was it always the intention, when constructing a sequel, to showcase more of Mick?

JARRATT: Well, the monster’s out of the cage now, you know? He was out from the get-go this time. It would have been a waste of time leaving him in cage, like we did in the first one.

MONSTER: Was it intended, then, to give him more motivation?

JARRATT: The intention was more to make it more of a chase film, a road film, as a point of difference. It’s still about chasing and hunting and gathering and getting [prey] back to the lair, but it’s 90 minutes of that rather than half the film, like the first time. It’s basically the same, but just drawn out a bit more, with a lot more money involved; with semi-trailers coming down the hills instead of F100s.

People said, in this one, they saw a lot more of Mick, and that Mick had grown. But Mick’s not the kind of person who grows. He wouldn’t even think about that. So, you see more of him, and you learn a bit more about him, but just because of the fact that he’s there. We want to entertain you, too, and he’s got a good sense of humour. We made that pretty clear in the first one, too. I just think you see more of him, and you get to know more about him, so it’s different in that respect.

MONSTER: Does it make it hard for you, then, to go back into that world?

JARRATT: No, it was much easier to go back to it this time. The first time, it wasn’t in front of audience, obviously, so I didn’t know if the character worked or not. I thought I’d either nail it, or it would be a really bad Foghorn Leghorn cartoon-type appearance. But, this time, I knew it worked, so I was very comfortable in that I knew the character resonated with people.

MONSTER: Is it fun, as an actor, to play such an out-there character?

JARRATT: Yeah, it is. Because it’s not real. Mick enjoys himself immensely, so as an actor I enjoyed myself, too. I mean, Ryan didn’t enjoy himself very much! [Laughs]

MONSTER: Why is he iconic? Why do we get a kick out characters like Mick?

JARRATT: He’s Crocodile Dundee gone wrong, you know? He’s a likable Aussie larrikin, and this horrible evil bastard comes out. He’s still this likable Aussie larrikin as he’s cutting your throat. It’s a paradox. It’s like, why do people get attracted to any of the bad guys? The Hannibal Lecters, the Freddy Kruegers. Even Humphrey Bogart. He always played assholes, but people loved him. It’s the bad guy thing, I think.

There are times, too, when you’re in a situation, and you think about [reacting a certain way], and you don’t. These movies ride with that feeling. Or, you know, why do people like roller coasters? You get in the roller coaster and it’s like having a car crash without the horrible bang at the bottom. You feel like you’re going to crash, but you don’t, and you still get that adrenaline rush.

It’s interesting that people always describe these films as “a good ride”, like a fun park. People get on and go for the ride. [People say] “Wolf Creek 2 is rough ride”. It’s like you guys get a ticket and you enjoy the game. We all know it’s not real. If it were a documentary, it’d be a worry! But, you know, it’s based on what’s happened, too, and I think people watching it remember that. It creeps up your spine that people actually do go through this. 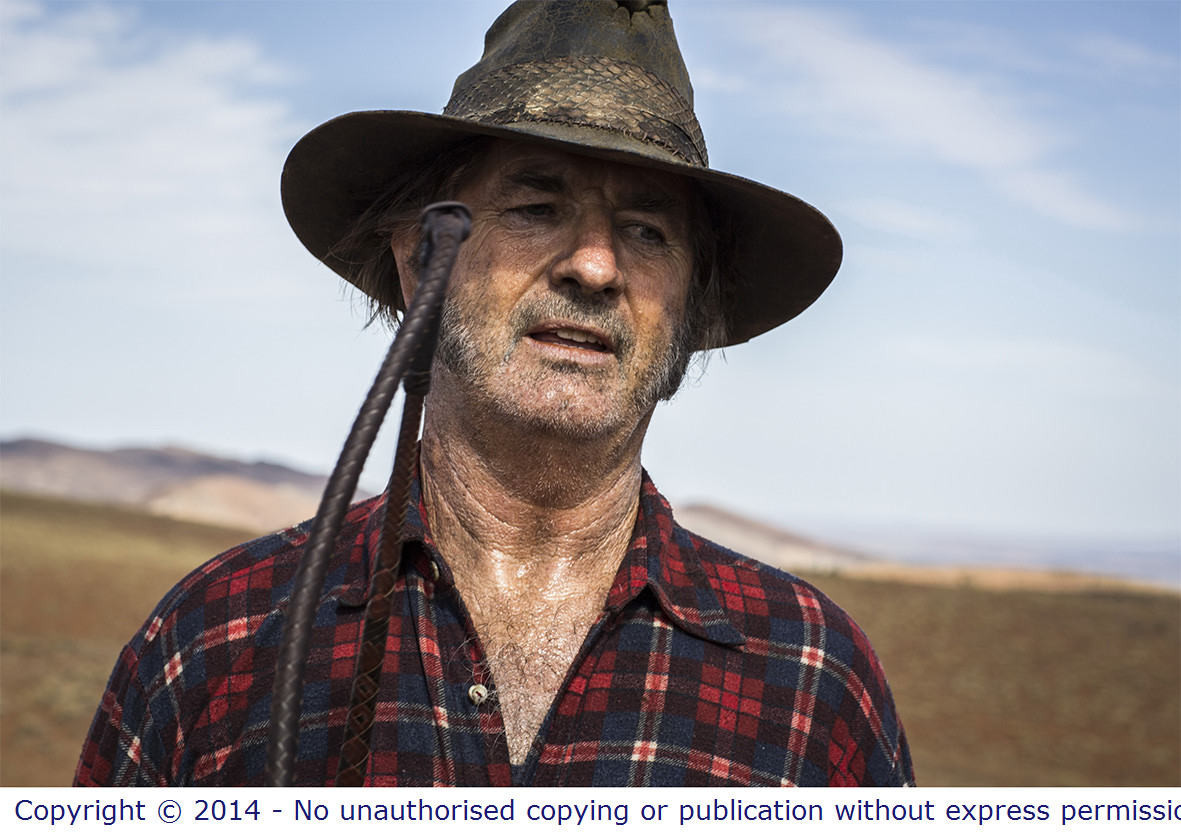 MONSTER: Well, you do realise now, right, that few people can go on an outback road trip without thinking of Mick?

JARRATT: People always say that, but Ivan Milat lived in Liverpool. He lived in the city.

MONSTER: Is it just the outback then, that scares us? Why do you think it does that?

JARRATT: It’s like the ocean, you know? You’re drawn to it. You love looking at a really rough ocean. You know when there’s 30-foot waves coming in at Bondi, and everyone rushes down to see it. They’re enticed to kinda wanna go swimming in it, but you think, I’ll probably die. And, it’s magnificent at the same time. The outback’s just like that. People wanna go out and get in it, and people do, but they don’t do the right thing and they can up dead. The outback can kill you just as easily as Mick can.

Wolf Creek 2 is available on DVD and BluRay now.