Features, Dawn of the Dead, Maniac, Nosferatu, Psycho, The Fly, The Hill Have Eyes, The Thing

The horror genre has seen its fair share of remakes. They are no less a stretch for Hollywood than a fifth or sixth sequel – don’t they all just rehash the original?!

Go into your local video shop (what are they?) and you’re more likely to be met with remakes than originals. Even sequels and prequels to remakes are more readily available than originals! Despite an overabundance of turgid retellings, there are gems to be found; remakes which offer the audience something different. Even the odd remake which betters the original!

Just like covers to songs, a good remake or reinterpretation offers audiences something exciting and of its time. Most art is timeless – evidentially it’s the execution which dates!

Nosferatu The Vampyre was one of the very first remakes – certainly of the horror genre. Directed by everyone’s favourite German, Werner Herzog, Nosferatu had an audio-track and was filmed in colour (a pale palette, admittedly). It also made use of Bram Stoker’s original character names, which were jettisoned in the original for reasons of copyright (hence the name)!

Remakes of both The Thing From Another World and The Fly would utilise the advances in effects technology in the 80s. These two films were passion-projects for their respective directors, who grew up on the originals. John Carpenter said of the original novella Who Goes There?, on which The Thing is based, offered something more than just a man in a suit (the titular creature). Carpenter was keen to execute this design. Despite the ground-breaking effects of both films (admittedly the big draw), the story and characters were never once eclipsed.

The Thing and The Fly are two of the best remakes (of any genre). Their longevity and admiration is testament to the film-makers who chose to reinterpret rather than rehash. Both films have sparked sequels (of a kind), and their iconography and imagery is forever being reimagined.

The advent of video and DVD brought numerous opportunities for reinterpretation, particularly in marketing and advertising. Born out of retrospective screenings, poster design is the current trend. Hand-rendered for the most part, the industry has provided us with many iterations of beloved classics. 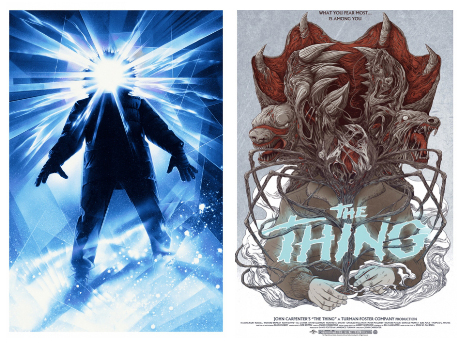 Coincidentally, artists of every calibre have been drawn to The Thing time and again. Famed studio, Mondo currently have four different designs in their archives (including Drew Struzan’s classic orginal). The most successful posters have always captured the pulse of the original movie. Often a key instant is reinterpreted – one of many universal moments which have us return again and again.

One of the more redundant remakes of the 90s was Gus Van Sant’s Psycho. Like Nosferatu, Van Sant’s offered us a colour retelling. Aside from the nod towards Bates’ masturbatory tendencies, this was the only difference in a literal shot-for-shot remake!

Aside from the obvious monetary concern, the attraction to most horror remakes must lie in the opportunity to up the ante! One has to offer audiences something different of course. With a moderate budget in place, the answer for many film-makers lies in the ability to turn stomachs. Advances in prosthetics and make-up (not to mention digital effects) has meant even the darkest recesses of the mind can now be brought vividly to life!

The remake machine produced more than it had ever done in the first decade of the 21st century. First came the J-horror remakes (The Ring/The Grudge), giving a western audience English-speaking fare, with a far-eastern flavour – really, who wants to read at the cinema?!

Then came a deluge of slasher remakes from the 70s and 80s. From The Texas Chainsaw Massacre to Friday the 13th, A Nightmare on Elm Street to friggin’ House of Wax – no stone was left unturned! Several gave birth to sequels, but few spawned franchises. This probably came as a complete shock to executives, who green-lit each reboot in the hope of seeing the likes of Freddy and Jason return at least another half a dozen times!

Zombies were back in fashion at this time. 28 Days Later had opened the floodgates and with it came a torrent of imitators and wannabes.

The Dawn of the Dead remake was one of the bigger successes, and one of the few remakes to (arguably) better the original. Director Zack Snyder took a leaf out of Danny Boyle’s opus and had his zombies run. Despite the haters (how can a reanimated corpse run?), running zombies made sense – particularly to those with low-boredom thresholds and ADHD! Despite the visceral action of his athletic undead, Snyder employed a terrific cast to ground the action in the mundane (the local Mall). The social politics of Romero’s original was not lost on contemporary audiences either – the draw towards commerce still evident in our day-to-day!

Of course the internet had since come into prominence. Consequently, subtlety and morality had disappeared, along with anything remotely sacred! As appetites grew and stomachs hardened, it would appear our cultural outputs would follow suit.

The term “gorno” was born out of one such remake (a hand-full of features adopted the more-is-more conceit at this time). Directed by Alexandre Aja, The Hills Have Eyes was a stunning achievement. There was gore-a-plenty, but Aja populated his film with fantastic character actors – plus an earnestness to play the film straight and as realistic as possible. Much of the violence came from the inescapable tension Aja and his team created.

Interestingly, Aja’s filmography is littered with remakes – including Maniac, for which he wrote the screenplay and produced!

Along with Hostel, The Hill Have Eyes spawned a series of films, which sought out to shock and awe! Unfortunately, most had little else to offer beyond pathological gore. Many remakes at the time were in name only. Few attempted to bring anything new to proceedings.

Rob Zombie’s Halloween offered the untold origins of Michael Myers. This was a bold effort on Zombie’s part. Unfortunately, the unstoppable/elemental facets of the character were lost somewhat by humanising Myers. The film and its sequel did look fantastic however – Zombie’s sequel being superior to Carpenter’s earlier follow-up!

Another remake to mix things up a little was Joe Johhnston’s The Wolfman. Writer Andrew Kevin Walker attempted something akin to historical lineage by bringing Inspector Abberline into the fold. Fresh from his Jack the Ripper case, Abberline was a fun addition, echoing the Universal hits of the 40s, which were rife with cross-pollination – particularly with the studios revered monsters. Despite these ideas, and the obvious passion the film-makers had, this remake fell short of its character-defining original.

Which brings us to Maniac! One of the few to bring something new to proceedings – in this case a whole new perspective!

There’s not much to say which fellow Monster, Alicia Lewis hasn’t already eloquently stated. Having waxed lyrical about reinterpretation for several paragraphs, however, I was keen to highlight Maniac’s poster campaign – and the subtle nods to the original Aja and director Franck Khalfoun dropped into their remake. 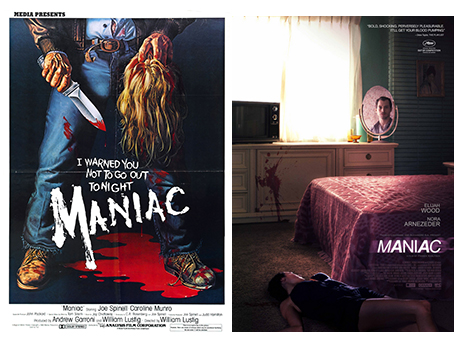 There’s no denying the visceral horror which both Maniac posters possess. I was hoping there would be some sort of acknowledgement of the original design in the 2012 poster. They’ve gone in the same direction with the film of course – acknowledging the perspective of Frank, through the reflection of the table-top mirror. I did find a rewarding visual at the end of the 2012 trailer however, which subtly brings the 1980 poster to life – this time in the reflection of a car!

To summarise, so few films have something original to say these days. If you’re going to remake a film then at least bring something new to the table – go “Bizkit” or go home!