Australia’s very first micro-budget, “Ozploitation” feature film challenge! If you think you and your team have what it takes to deliver a quality micro-budget exploitation feature flick? WE WANT TO HEAR FROM YOU!

We’re looking for a good old fashioned Aussie cannibal flick! Why cannibals? No other reason than we LOVE cannibal flicks, so BRING IT ON!

We’re looking for filmmaking teams adept at churning out nasty little masterpieces on the smell of an oily rag.

You’ll conceptualize it, but we’ll help you develop it, fund it, produce it and most importantly, distribute it in Australia, New Zealand, and the UK, before selling it to the rest of the world! …And if that’s not enough – we’ll even give you a RED CARPET PREMIERE at Monster Fest 2014 – THIS COULD BE JUST THE BREAK YOU NEED!

Monster Micro-Nasties is not a competition for individuals – WE WANT TEAMS!

We believe the key to making quality micro-budget films is found in passionate, committed teams, and that’s exactly what we’re after. The size of your team depends on you, but we want teams that work great with each other, utilise a variety of skill sets and are driven by one thing… to make great little flicks THAT SELL!

Please read the following GUIDELINES carefully. If you have any questions, do not hesitate to contact us at info@monsterpictures.com.au with the subject: Monster Micro-Nasties.

We want a two-page project overview. We want strong, interesting, unique and original ideas AND WE WANT ELEMENTS. Elements? Yes elements! It’s an exploitation film for Gawd’s sake, so we want stuff that’ll make you squirm. Give us ideas that contain flesh, gore, noise, guts, grime, thrills, chills, stuff to challenge and enthrall an audience – stuff that will make the film stand out in a crowd, stuff that will make the film sell. Glorious B flick nastiness! Sell your teams virtues and tell us exactly why your team deserve this opportunity to make this film!

CONCEPT PITCH: A 300-word synopsis of your idea.

It needs to be:

TEAM CV: A one-page CV giving us a brief overview of the team behind your potential masterpiece.

On Friday 25th October the 12 best entries will be announced and contacted individually. Each ‘Semi-Finalists’ will be given 1 week to complete a 3 page extended treatment of their idea. You’ve got our attention now it’s time to go for the jugular!

On Friday 8th November six ‘Grand-Finalists’ will be selected and asked to prepare a 10-minute concept and team pitch to be presented at the Monster Micro-Nasties Grand Final gala event on Sunday 25th November at Monster Fest Melbourne.

We want you to pitch in any way that you feel will adequately portray your idea and your teams ability to bring yoir idea to life. You can show images, you can prepare a trailer, you can act it, sing it, talk it, hell you can fart it in bubbles – we don’t care, just so long as you do your best to win us all over in ten minutes!

First off we’re looking for great ideas – original, unique and most importantly ACHIEVABLE. It’s no use trying to pitch a multi-million dollar blockbuster – we’re talking micro-budget, so keep it real folks. You can be ambitious, there’s no problem with that, but ambition will need to be supported by a super team to pull it off – and we’re going to want to hear exactly who and how.

It’s important to know that we’re looking for films that can sell, so we want people with ideas that will stand out, if you have some ideas on how to push and market your film then we want to hear them.

Concepts will be judged on three main criteria – Originality, Team and Marketing Potential.

Anything that you can bring to the table to help give your idea/team the edge over the other ideas/teams will be taken into consideration. For instance if you have 20K that you want to throw into the film then tell us and the judges, if you have a commitment from Rutger Hauer to play the lead then tell us – if Boeing have donated a Airbus for you to crash into the Mojave Desert, and will also fly you and your team there to film the damn thing, then let us know – it may just give you the edge you need!

The winner of the competition will receive:

Runners up will get:

To be announced in the run up to Monster Fest. 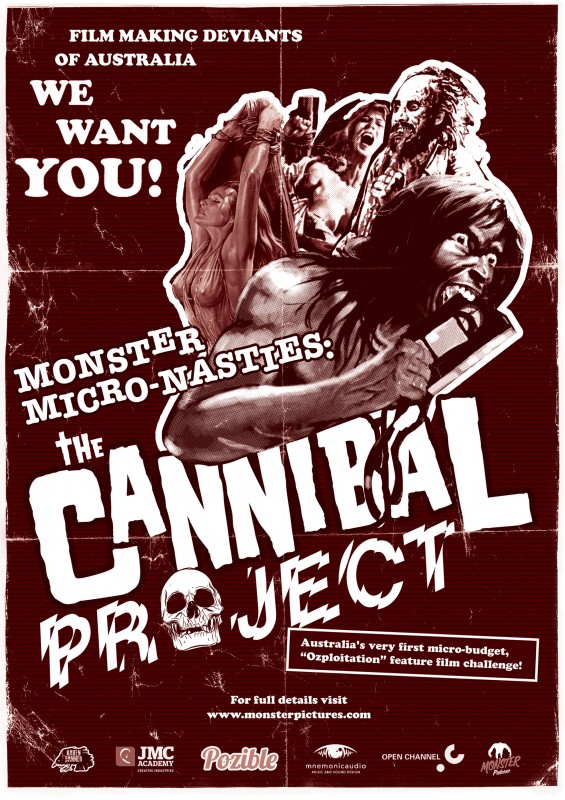