A ONE NIGHT STAND WITH ERIC ENGLAND, DIRECTOR OF CONTRACTED

This is one heck of an amazing filum that you definitely don’t want to miss. Lucky for you, not only is it screening at Monster Fest this year, CONTRACTED will also be available on DVD and Blu-Ray on the 19th of January 2014 (pre-order here *cough*)

Hi Eric, first things first, how freaking excited are you to have CONTRACTED playing at this year’s Monster Fest?

EE: So freaking excited! I’ve heard nothing but great things about the festival, as well as the fans down under. There are some great films playing this year and I’m honoured to be alongside them. I’m a big fan of Australian cinema and I think Contracted is going to fit right in down there. I think the only way I could be MORE excited is if I was able to be there with all you guys!

For the uninitiated tell us a little bit about the film, what’s it about?

EE: It’s about a troubled young woman that has a one night stand with a random stranger and contracts what she thinks is an STD, but turns out to be something much worse.

This film is a kind of cautionary tale, in the most messed up sort of ways. Where did these ideas come from? What inspired you?

EE: Well, I had a really bad one night stand and I woke up the next morning with this rash…. Kidding! I really wanted to tell a story in the virus/infection sub-genre which has been a little dead (no pun intended) for a while and toss in some elements of body-horror, as well as mystery/paranoia. I’ve also been really interested lately in using sex as a device for horror because it’s so universal. Sex is something we can all relate to for the most part and I thought it would be a great way to start a horror story. It’s intimate and vulnerable, especially for a young woman… So all the pieces just seemed to click when I was creating this idea. I basically just thought “what would scared me?” and put it on the page until I hit this massive revelation.

What sort of films did you grow up watching? Did these films lead you to where you are today, making genre films?

EE: Absolutely. I loved genre films growing up. I didn’t necessarily watch tons of straight horror films, but I definitely watched a lot of violent and dark movies as a kid. I can remember seeing Stephen King’s IT when I was just a child and it’s one of my earliest memories with movies. It scared the hell out of me and still does to this day. I hate clowns because of that movie. I also saw the original Fright Night, Night of the Living Dead, Beetlejuice (which I think had an influence on Contracted if you look for it), Cujo, as well as lots of exploitation films like Terminator, Desperado, Pulp Fiction, etc. I remember watching Lost Boys and Near Dark a lot as well. My parents were young when they had me, so I was exposed to a lot of cool movies because that’s the stuff they were into it. Thanks, Mom and Dad! 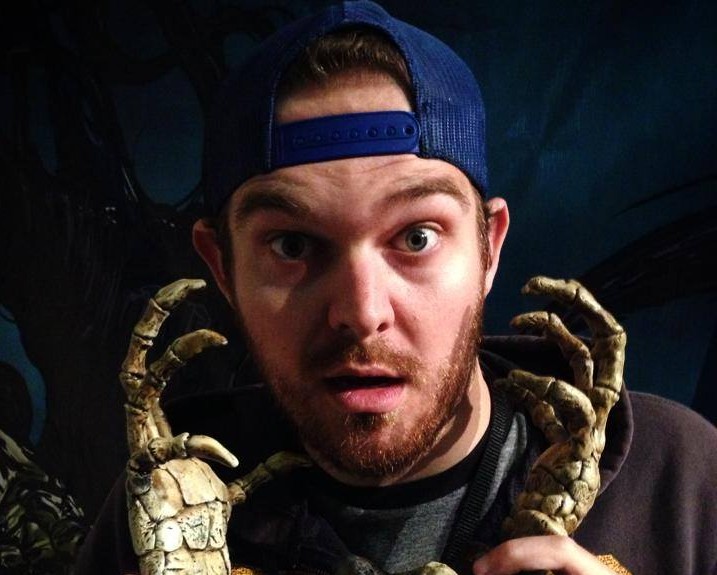 Can you tell us about the process for making this film, what challenges did you face?

EE: The challenges for me were definitely in the making of it. We had literally no money and shot the entire film in 15 days. No pick-up shots, no re-shoots. 15 days. In Los Angeles. With no money… That’s tough. But aside from that, the film is such a fine balance of “what the fuck” and gross/horror elements. Finding that line of what’s too much and what’s appropriate was really hard. Especially when balancing the humour. I never wanted this to FEEL like a comedy, but it definitely has moments of fun in it that I want the audience to pick up on. I tried to play the tone as straight as I could so you never lose sense of dread in the film, but it’s definitely okay to laugh. I don’t take the film entirely seriously, so that was a tough balance to find. As well as keeping track with the make-up and FX stages for Samantha’s transformation and deciding when to let a little more information out to the audience. It was all a juggling act. On that note, I need to give a big shout-out to my make-up artist, Mayera Abeita and my lead actress, Najarra Townsend. They were incredible on this film and really helped pull it all together.

What do you hope the Monster audience takes away from this film?

EE: I hope they just have a good time and this is a movie they want to go show their friends and help spread the word. I plan to be making movies for a long time and I love to build relationships with my audience. This is technically my third movie and I’m only 25, so I want to continue to grow and get better as a filmmaker and I hope the audience is down to go on this journey with me. So if they dig the film, I hope they’ll spread the word and I’ll hopefully bring something even better with me down there next year and the years after!

Can you let us in on what you are working on right now?

EE: Definitely. I’m working on an amazing film called Hellbent (formerly known as Underneath) with writer TJ Cimfel and producers Grant and Greg Mohrman. It’s one of the best scripts I’ve ever read and we’ve got some amazing pieces in place already. We plan to be shooting next year and I can’t wait to get behind the camera on this one. It’s going to be one hell of a ride! In addition to that, I’m currently working on two films that I wrote. One is a horror-comedy that I plan to be shooting very soon. It’s in the vein of Evil Dead, Pet Sematary and American Werewolf in London. It’s a project I’ve been wanting to do for a while and I’m excited to be moving forward on it. I’m also close to being ready to shoot a sort of companion piece to Contracted, that’s in line with the sex-horror subgenre, but taking it to a much more psychological place. I’m excited for all these films and can’t wait to share more!