The Freaky Stuff: The Early Works of David Cronenberg

“Did you ever see that scene in Scanners where that dude’s head blew up?”

This month sees the release of David Cronenberg’s seminal Scanners on BluRay through Criterion. To celebrate, we’re looking at seven films from the director’s early career –- films that, when viewed back to back, showcase the development of one of cinema’s great visionaries

Canadian-born Cronenberg’s work is often inspired by the inner workings of the human body: its pleasure receptors, its tendency to mutate, and its ongoing war with infection. Cronenberg has been making movies since the 1960s. His films, while challenging, contain a strange, insalubrious allure. While not as household a name as thematic contemporaries David Lynch, Brian DePalma, and Roman Polanski, Cronenberg has built an influential career spanning generations.

Cronenberg first came to prominence in 1975 with Shivers. The film tells the story of experimental Dr Emil Hobbes (Fred Doederlein) and his obsession with parasitic organs, the kind that could potentially replace defunct organs (liver, kidneys) within the human body. Hobbes’ desire with his experiments is to reconnect humanity with its more base instincts. In his fervour, however, Hobbes’ experiment produces an organism as amorous as it is deadly. Shivers opens on the good Dr Hobbes chasing down his latest experiment – 19 year old Annabelle. He catches her, and as a result of his botched tests, Annabelle develops an increased libido. Not all goes to plan, however, and when Hobbes discovers the more threatening side of his work, he disposes of his experiment. Problem is, the parasite is already out! 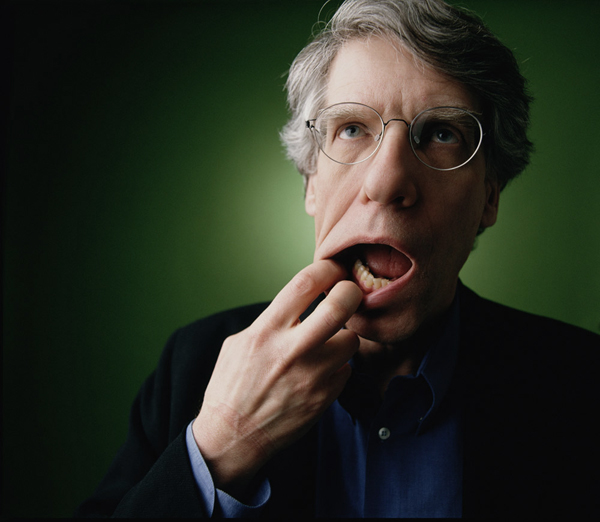 Before long Hobbes’ parasite multiplies and spreads, infecting more and more residents of the luxurious, isolated Starliner Towers. Falling through garbage chutes, appearing in letterboxes, and emerging through drains, these shivering parasites stop seemingly at nothing to increase in number and spread their gruesome love. Soon, tower residents are romping around the place in an endlessly awkward fashion (a visual highlight of the film), creating more and more mayhem as they go. Thus begins a race involving a physician and a nurse to stop the spread. Not an easy task.

The lo-fi parasitical creation, with an enemy Cronenberg would affectionately refer to as a “turd on a string”, would come to solidify Cronenberg as an innovator, and similarities between his film and the more celebrated Alien (1979) became noted by critics and scholars, as well as by Cronenberg himself: “The Hobbes parasite lived in the human body. It burned its way out using corrosive fluid, then jumped onto (another hosts) face and went down your throat!” Sound familiar?

Shivers continues to be influential, with modern horror films Slither and Piranha 3DD making direct visual connections to the classic.

While Shivers eventually won raves, Scanners (1981) was the film that put Cronenberg on the cinematic map. It was also quite a leap forward for the director in terms of commercial success.

The scanners are the result of an experimental drug taken during pregnancy. These scanners, now all grown up, have the ability to ‘scan’ others via a nervous-system connection. This allows them to hear others’ thoughts. Complications ultimately arise: what does ‘scanning’ mean to contemporary society; how do the scanners fit in? And, tellingly, how can they be taken advantage of? Enter Darryl (Michael Ironside), a particularly skilled scanner who decides to create an army of fellow scanners to take over the world. It’s then up to lowly Cameron (Stephen Lack), an unhappy scanner dismayed by his considerable scanning abilities, to stop Darryl and find his place in the world despite his awful gift.

As sympathetic scanners convert to the human cause, the film sees an eventual scanner face off in a telekinetic showdown that allowed Cronenberg to showcase his eye for disturbing, corporeal effects. Cronenberg provides the ultimate moment of horror in what has become one of the most memorable scenes in film history: a scanner-induced head-explosion for the ages.

The film, too, was a headache to make by all accounts. Canada’s film-financing structure was partially to blame, as was lead actor, Patrick McGoohan’s unabashed Catholic views and disaffection for the production. Despite these restraints, Cronenberg completed his picture, Not only has the film endured and inspired future filmmakers, it has also proved well before its time in terms of its storytelling, as the digital age has since made some of the more outlandish statements made in the film chillingly viable.

Videodrome and The Dead Zone (both 1983) would follow. The home-video evolution was in full swing at this time and Cronenberg was keen to highlight our infatuation with new technology, particularly as it was coming into the home and becoming more and more accessible. It was clear that Cronenberg had evolved as a director, and Videodrome would see him evolve as an artist as well, unswayed by commercial success.

In this one, James Woods plays Max Renn, a television executive looking for the next big hit. He discovers Videodrome, by way of a technical advisor. The show appears to broadcast actual snuff films. Digging further into the project and discovering the shows origins and purpose, Renn finds much more than meets the eye. And it’s not long until the hallucinations begin. Eventually, Renn takes his issue to Spectacular Optical and, as a result, is given the A.S.O.I. helmet to wear – a device which will record his hallucinations, in an effort to distil Renn’s ailment. This is Cronenberg, however, and we quickly learn that little is quite so simple.

Considerably more abstract than some of his earlier ventures, Videodrome was arguably his most commercial venture employing stars like Woods and Deborah Harry, and effects maestro Rick Baker who was hot property at the time having just shocked the film world with his creations in John Landis’ American Werewolf in London. Without Baker, one wonders just what the film’s famed vaginal opening on Woods’s stomach might have looked like!

Unsurprisingly given its maker, Videodrome is visually intoxicating. The performances and special effects are exemplary and the script raises interesting (and ongoing) questions about society’s obsession with technology and the allure of the macabre. Cronenberg’s uncanny ability to forecast future technologies is again evident, also, with today’s reality-obsessed television programming (not to mention the curious similarities between the A.S.O.I. helmet and Google Glass).

One of the more telling lines in Videodrome in terms of our response to our ever-evolving world, and Cronenberg’s consistent daring and boundary-stretching as a filmmaker, comes from the head of Spectacular Optical, Barry Convex (Les Carlson). As Convex leaves Renn to experience an hallucination, he states: ”Forgive me if I don’t stay around to watch. I just can’t cope with the freaky stuff!” With that, a knowing Cronenberg audience prepares itself for a horror-treat.

Cronenberg was now known as the King of Venereal Horror. As his career progressed, he appeared intent on theorising on the evolution of the human body. With Scanners, he looked at telekinesis and mind control. Videodrome had worked over the physical and mental duality of experience. Humanity and sexuality were targeted in Shivers. With The Dead Zone, he continued his engagement with the workings of the physical self, this time looking at the brain’s response to coma. The Dead Zone, interestingly, was Cronenberg’s first adaptation, deriving from a novel by Stephen King.

The Dead Zone tells the story of Johnny Smith (Christopher Walken) a man awakening from a five year coma, only to discover he has psychic powers. With new found information at his disposal, Smith is beset with an abundance of moral dilemmas –- should he interject if one person’s future threatens the moral majority? It’s a major question, and its answers prove difficult for Johnny. They also allow Cronenberg to up the ante on his visceral visuals with the film producing some classic, unsettling moments.

Cronenberg followed up The Dead Zone with another adaptation, this time a remake of Kurt Neumann’s 1958 film, The Fly. With this one, Cronenberg would hit the A-list. The Fly, famously, involves scientist Seth Brundle getting more than he bargained for when attempting to shift matter from one space to another via a self-designed ‘telepod’. Brundle, with the not so subtle goading of journalist Veronica Quaife (Geena Davis), uses himself as the guinea-pig. He enters the telepod; and so does a housefly. You know the rest. What unfolds is a smart, grisly exploration of humanity vs. science, man vs. animal, and the consequences of an intemperate obsession with one’s work. 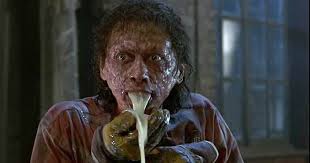 (Avid readers of this site will remember The Fly as being featured in our Monster Metamorphosis (http://monsterpictures.com.au/features/monster-metamorphosis-creating-a-modern-maniac/) article – as one of the greatest examples of Hollywood’s remake machine.)

The Fly is a true classic! Almost 30 years later and the film retains the power to engage and shock. The plot (despite the gruesome effects and science-driven synopsis) is essentially a love story, which encourages you to foster the doomed romance up until its sad conclusion. As the driven scientist and the journalist who documents his story, Jeff Goldblum and Geena Davis excel. Rather than the camp-like transformation Vincent Price took in the original, Jeff Goldblum changes slowly, decomposing from the outside-in. Having utilised Rick Baker’s talents in Videodrome, Cronenberg turned to a contemporary of Baker’s in Chris Walas (who collected an Academy Award for his efforts). The effects are fantastic, even by today’s CGI-standards. Contributing to their success, also, is Goldblum’s ability to emote through layers of prosthetics. Even after Brundle’s full transformation, Cronenberg steps in and masterfully has the audience sympathise with his vile creation – a testament to the director’s artistry and genius.

Cronenberg’s ascension from rookie to box-office success (The Fly was a hit in ’86) is almost an inevitability when looking back on each of these classics. Each film attempts originality of story and style, and though they may contain claret and pus by the bucketload, they demonstrate Cronenberg’s clear desire to ground each terrifying creation in the everyday. The result of which has become creating feasible science fiction which has occasionally ushered in science fact. He stands by his creations like a proud father, excelling in turning his ideas into horrifically tactile entities which can be enjoyed on repeat –- but perhaps after you’ve digested your dinner!

Scanners is available now from Criterion. The new, restored edition was supervised by Cronenberg and includes new documentaries, interviews, essays, and TV spots. 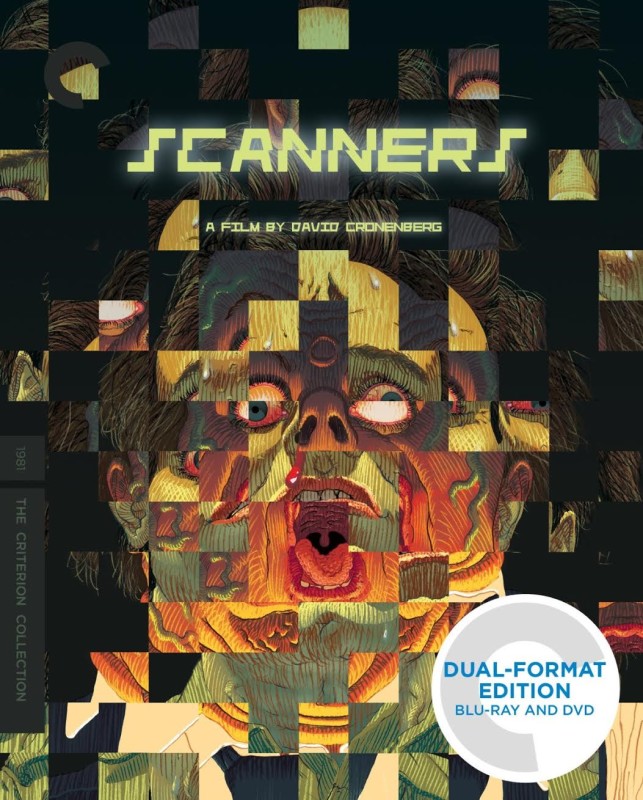