Who’s Your Daddy? 8 of the best and worst in fatherhood.

It’s that time of year again, when we bust out the socks, aftershaves and Inspector Morse boxsets and celebrate the ideology of The Father. The movie world has given us some brilliant examples of patriarchal leadership. Some horrendous, some shining examples or virtue. Let’s kick back, pour ourselves a glass of bourbon, light a pipe and take a look at 8 examples of the best and worst fathers out there on celluloid. Oh, in the words of Hooper X, ‘Always some white boy gotta invoke the holy trilogy.’ If you’re one of them, then prepare to be pleasantly surprised by the lack of Sith Lords in this list.

Ah, Hit Girl… The foulmouthed sidekick and daughter of Big Daddy. Okay, I admit… Your dad is a superhero and you’re his spunky young sidekick, taking down the baddies, hiding in the shadows, swearing like a sailor and not being the hero your city asked for, but being the hero they need. That all sounds pretty awesome if you were given the choice. But was Hit Girl given one? Whichever way you slice it, Hit Girl has been indoctrinated into her life of crime fighting. She’s been raised to know no other life outside of kicking ass, butterfly knives and how to take a bullet. Well, as a kick in the nuts to gender expectations, it’s great, but as a form of parenting? Not so much. What chance of a normal life has Hit Girl got when Big Daddy goes to the big old Justice League in the sky? Not much of one surely. Jane Goldman’s script for Kick Ass alters the justification for Big Daddy’s actions to something slightly more heroic than Mark Millar’s comic, but by Christ, it still comes across as a big dirty slab of self-serving parenting. Big Daddy, you may be named after a British wrestler, but you’re still a dick as a father.

There’s a dark side to John Hughes’ legendary tale of what happens when rich kids decide that they just, gosh darn it, deserve a day off school. His name is Cameron. He is a bag of impotent rage, who seems to be constantly ill, hiding under his sheets and fantasizing about his own death. Even when Ferris gets him out into Chicago, Cameron is convinced his father is looking out for him. Hughes describes Cameron as fearing that ‘the more you look at him, the less you see that there is of him.’  How does someone get like this? Well, a lot of it maybe down to his father. Whilst, Ferris jokes about Cameron’s father’s love for his Ferrari, Cameron sees it as a symbol of all the parental nurturing he never receives. When he finally snaps after a day’s frivolity and singing Danke Schoen, Cameron unleashes a hail of comfortable-shoe-coated-kicks to the object of his father’s affections resulting in it flying gracefully like a hippo out of its stable into a ravine. We never really find out what happens to Cameron, but I suspect this is a father and son relationship that’s going to take a little more than hugging it out.

Speaking of fathers who make everyone put their lives on hold whilst they pursue their dreams, here’s Roy Neary (Richard Dreyfuss); a blue collar worked from Indiana whose close encounter (you see what they did there) with a UFO leads him down a path of obsession and just generally ignoring his family. Oh, everyone’s dad has passion; stamps, football, that bit at the back of the cupboard you’re not allowed to look in… But Roy takes it to the next level, alienating his entire family to the point where his wife takes the kids and leaves. And who can blame her? I mean, have you had to put up with a scale model of Devil’s Point in the your living room made out of dirt?! So, what does Roy do to mitigate the family woes? He shacks up with another alien enthusiast and hops on board a UFO. Not so much as a bye or leave mate. Just, whoosh, off to Venus or Mars or wherever deadbeat dads reside.

Probably the darkest daddy on our list. Natural Born Killers is a neon soaked assault on the senses in terms of taste and decency, whilst giving Oliver Stone plenty of time to wag his finger at the media. Our anti-heroes Mickey and Mallory leave a trail of violence in their wake. They are sociopathic and unforgiving in their destruction… And yet those around them are just as bad, if not worse. Case in point, Mallory’s father, Ed Wilson; a violent, sexual predator who rules his house in his stained underwear. Played fiercely by Rodney Dangerfield, Ed is such a shit, we have reasons, if not excuses, for why Mallory is the way she is. Known for his comedy and catchphrases, Dangerfield admitted in an interview that he adlibbed a number of Ed’s fruiter phrases!  His actions made all the more horrific by Stone juxtaposing them against the tropes of your everyday sitcom (laughter + ass grabbing = vomit inducing).

Martin Brody moved to Amity Island for a quieter life for him and his family. And what could be quieter than a beach side resort that only picks up during the summer? Shame about the bloody big shark that’s tearing through the town’s residents like a Babe Ruth at a buffet. Ignored by the Mayor, Brody takes it upon himself to end the shark’s reign of terror. And when his son is nearly caught up in the horror, it makes it all the more personal. Brody isn’t your typical action hero impervious to bullets. He’s a family man first and foremost. There is a wonderful scene where a stressed Brody shares a moment of frivolity with his son. A simple game helps him forget all his troubles and positions him to us as a loving father. Brody’s parental instincts are brought to the front in Jaws 2, when he once again finds himself caught between his children and a shark. When your dad takes on two killer sharks, you know he’s made of sterner stuff.  However, Brody isn’t just a father to his children, but to Amity Island has a whole. Protecting every man woman and child. In my head, Jaws 3 and 4 never existed. In fact, Brody is still out there, now Mayor of Amity, a loving grandfather and always keeping an eye open for any nautical threat.

You’re in Paris, you’ve been kidnapped by a group of clearly foreign nationals and it looks like you’re set for a life of rather horrific, sexual subjugation? At best, you can hope the US embassy will find you and ship you back home… However, if you’re the daughter of Bryan Mills (Liam Neeson), you can expect a whole can of whoop-ass being poured over the Parisian skyline. When we first meet Mills, he’s a divorcee living in a crummy apartment block, who looks after pop starlets for a bit of income. He doesn’t come across as much to look at. Wait, did I mention he’s an ex-CIA agent? Oh yes. This man takes shit from no one. So, when his daughter is kidnapped in Paris, he calls in favours around America and Europe. Calm and collected, he leaps from bridge to car to boat cracking skulls along the way. And at the end of it all, he can use his connections to get you a singing lesson with Holly Valance! Yeah, you’re probably psychologically scarred and fearful to ever step foot on plane, but hey, Holly Valance!

How many parents would put up with the shit Clifford’s son, Clarence, puts him through? He turns up at his trailer from an extended absence a new lady on his arm and the mafia on his tail. Then he gets you to do a little digging around to find out if he’s got away with the murder of a big time white Rastafarian/drug dealer/pimp. What happened to the days of cracking open a beer and watching TV? And what’s Clifford’s reward after all this? A pash with his son’s missus and an enraged Christopher Walken snarling for the location of his son. Despite the strained relationship he has with his comic book hawking prodigy, Worley (Dennis Hopper) stays loyal to the end. Refusing to let himself give away Clarence’s location, Worley tells Walken’s gangster a revisionist history on the genetics of his Sicilian heritage. Blunt, jovial and ever so racist, the speech results in a bullet to old Cliff’s head. ‘I knew cliff had to…insult the guy enough that he killed him’ Tarantino has said, ‘because if he got tortured, he’d end up telling him where Clarence was.’ Most parents say they’d take a bullet for their kids, Worley tragically does.

Clark is one of life’s losers. In the classic National Lampoon’s Vacation, he’s seen by his family as being a bit of stuffed shirt. And in a way, they’re right. Clark’s view of the nuclear family hasn’t evolved much past the 1950s; the doting wife and 2.4 loving children. So, why would he see a problem is trekking across America to Wally World? It’s a perfect opportunity to spend time with his kids.

It’s not the smoothest trip in the world, but despite the set backs, Clark rarely backs away from anything less than smiling optimism.  It is practically engraved in his DNA. Been given the wrong car at the dealers? No matter. Wife’s great aunt has died? He can sort it. Taken a wrong turn and ended up in a rough neighbourhood. Hey it’s an education of a part of America you never get to see, ‘Kids, are you noticing all this plight?’ Clark is a monument to the parent who wants to ensure the best in life for his children. Hell, he’s even willing to put a gun to John Candy’s security man if it means his family can enjoy at least one day at a Wally World that’s been closed for refurbishment. Clark, life may dump on you from a great height, but God loves a trier. 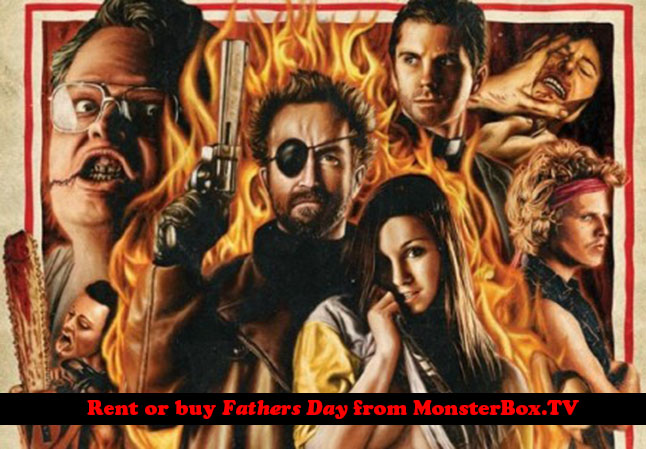 Click to Rent or Buy Fathers Day from MonsterBox.TV