The WWE didn’t actually make movies then, they only made wrestling. That fact, combined with Vince’s trademark “I am a crazy man” delivery, prompted lots of chuckles at the screening but he had a point.

There are many parallels between professional wrestling and cinema. I’ve been wrestling for 15 horrendously painful years now and it continues to astound me when people who love the fiction of cinema are unable to reconcile that same love with the fiction of wrestling.

Both film and wrestling are narrative driven art forms with a traditional emphasis on showing rather than telling a story. Both are also broadly considered to be populist entertainment while still supported by an independent sub-industry that caters to more obscure, eclectic tastes.

Both have good guys and bad guys, protagonists and antagonists who struggle against each other in such a way as to hopefully illicit an emotional investment from the audience, despite the fact that, when the audience isn’t looking, all the performers stand around drinking coffee and chatting together.

Surely wrestling, even more so than boxing, is tailor made for cinema. So why are most wrestling films so brain-obliteratingly awful?

Part of the problem is that a lot of these films would be considered to be fundamentally bad whether they were about wrestling or lawn bowls. A crappy film is a crappy film and fantastic physiques can only put so much shine on a turd (see anything with the Barbarian Brothers in it, for example.)

The main issue seems to be whether the wrestling itself should be presented as a legitimate sporting competition much like wrestling portrays itself in its own programming, or whether to tell a story about the lives of wrestlers whose job it is to pretend to fight people. The most common choice seems to be to present it like boxing.

“Wrestling is real, here are wrestlers, wrestling for real, oh man I can’t believe that evil promoter wants that wrestler to throw the fight- that’s so cruel, to make a wrestler lose on purpose!” That last bit is my favourite wrestler movie trope, the old throw-the-fight schtick. Especially hilarious considering most wrestlers will happily lie down and be pinned by anyone as long as the price is right.

So why this insistence on presenting wrestling like boxing?

For a long time, wrestling represented itself as something it wasn’t. It spent so long publicly pretending to be a sport that it missed the opportunity to tell everyone that it was actually an art. More specifically, wrestling is pretending to be fighting. So when dramatically portrayed in film, I guess the obvious thing is to make the emphasis on winning. From No Holds Barred to Bad Guys to Grunt: The Wrestling Movie, it’s always about winning (and occasionally beheading.) The wrestler wants to win, he doesn’t want to lose. Curse you, dirty promoter, trying to fix the match, etc.

The first thing most of my non-wrestling peers (we call them “civilians”) ask me after a weekend of wrestling is: “did you win?” and half the time, I have to think for a moment because the win really wasn’t of tremendous concern to me. Just like in narrative fiction, it’s not so much about whether you win or lose, it’s how you lose and why. What does that win/loss mean? What are the dramatic implications of the result? Wrestling films seem to miss that point and instead, always take a desperate swing at being a grappling version of Rocky.

Yet even Sylvester Stallone showed a greater understanding of wrestling psychology in his one scene with Hulk “Thunderlips” Hogan in Rocky III than most wrestling films have for the subject at all. In this scene, the physicality of the combat is real, Stallone has too much respect for the athleticism of wrestling to bury it to boxing, but the motivation of both Rocky and Thunderlips is to put on a show.

The result is a draw but that doesn’t matter, the point was to create a scene of chaos. The answer to “who would win between a wrestler and a boxer?” is “it doesn’t matter, they’re different things”. And if you’re really that keen to find the answer, watch Muhammad Ali vs Japanese wrestling legend Antonio Inoki. Turns out that answer is: “why the fuck am I watching this horrible thing?” It’s seriously half an hour of Antonio defensively lying on his back, kicking at Ali’s legs when he wanders too close. It’s like a tedious live-action diagram explaining exactly how incompatible the dramatic mechanics of professional wrestling are with the legitimacy of competitive sport.

The only film of real note to approach wrestling as the craft it actually is would be Darren Aronovsky’s The Wrestler. Even then, barring an opening locker room scene in which some wrestlers, while planning their impending match, manage to cram 50 years of wrestling lingo into a three-minute exchange, the film is more about the consequences of wrestling rather than the mechanics of the craft. The scene in which Mickey Rourke’s character rolls around in thumbtacks in his horrifically violent match with the Necro Butcher (I’ve totally wrestled that Necro guy, you know, he threw chairs at my face until both him and my face were tired) does at least reveal the wrestling secret of how to appear like you’re being mutilated by weapons. Yup, it turns out that you just strategically mutilate each other with weapons. Wrestling Secrets: Exposed, right there.

Ultimately, the film is called The Wrestler, not The Wrestling and it’s really one man’s story with his craft as the backdrop, rather than a deeper exploration as to how wrestling actually works.

Maybe that story would work better as a sitcom? Like The Larry Sanders Show if Larry Sanders were played by Stone Cold Steve Austin instead of Garry Shandling? 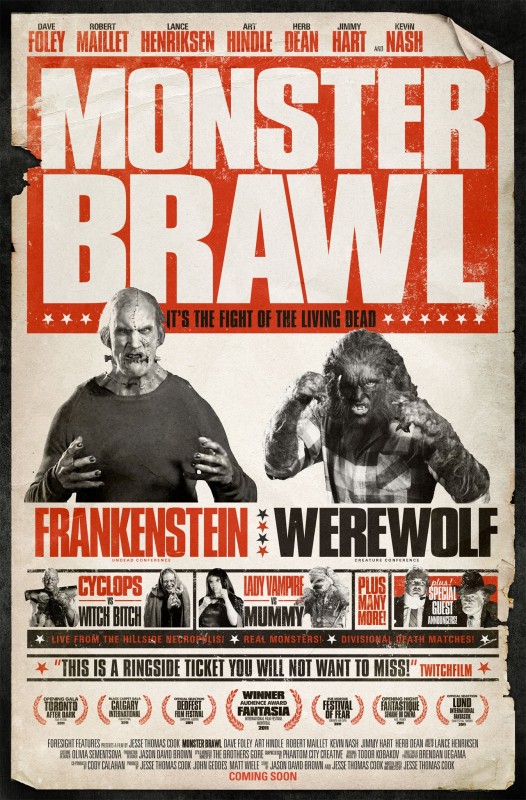 But I’m here to talk about Monster Brawl, which tackles the conundrum of turning wrestling into cinema in a totally new way. Rather than contriving a narrative about wrestlers, the whole film is instead presented in the form of an entire wrestling event, complete with commentary, promos, backstage vignettes and of course, wrestling matches. I suppose it’s comparatively a progressive step. Rather than trying to come up with a reason for us to give a shit about a protagonist who happens to be a wrestler, it’s just a bunch of wrestlers, wrestling. Only they’re actually monsters: pro wrestlers R.J. Skinner and Rico Montana feature, for instance, as Werewolf and Zombie Man, respectively. This isn’t really an actual stretch, considering pro wrestling has featured more than a few mummies, vampires, animals, zombies, and at least one minotaur.

Of course, all sorts of actual pro wrestlers have wriggled out of the woodwork to get a part in Monster Brawl, just like every other wrestling film or wrestling-themed episode of a sitcom ever. Whether it’s Rowdy Roddy Piper in It’s Always Sunny in Philadelphia or the Bushwackers in that episode of Family Matters, wrestlers usually pop up in this sort of thing, guaranteeing that at least the wrestling looks like pro wrestling and not someone’s version of someone else’s idea of what wrestling might actually look like but they’ve never seen any. Just like that episode of Nightman with two guys who looked like underwear models awkwardly grabbing at each other and then falling over.

I guess that’s a type of wrestling? Lemme look at some on the Internet and get back to you… 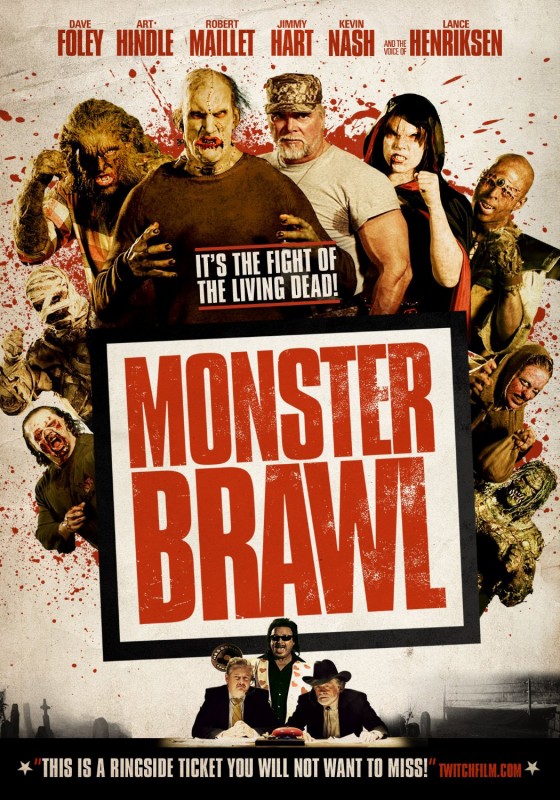