By visiting this blog, I figure it means you have an interest in Japanese cinema. I don’t mean old school Kurosawa / Ozu (which I respect and love) or the modern dramatic stuff populated by “idols” (which I loath and enjoy hating on when the opportunity arises), but the so-called extreme cinema that features buckets of blood, rushed-to-completion CG effects, and a generous amount of cute girls. However, before getting to the good stuff, I’d like to make my first entry at Monster Blogs an introductory piece. I’ll try to stay on point because, if you’re like me, you probably don’t give a rat’s ass about the details of other peoples lives unless they’re family, friends, someone famous, or better yet, someone infamous.

With that said… I was born outside San Francisco and raised in New York where I grew up hating school and loving genre cinema. Science fiction and horror mostly. Those early years were spent with my head lost in the clouds over TV shows such as Star Trek, The Outer Limits, Lost in Space, and The Time Tunnel. In the ’70s I went to every comic and film convention I could get my parents to drive me to, my first being the ’74 Star Trek convention in NYC. Back then the con circuit was in its infancy. Fan circles hadn’t time yet to form, fracture, and turn on each other. The actors and staff – astonished by the overwhelming passion of this unorganized fan base – mingled freely, talked openly, and never ever charged for an autograph. Good times, for sure.

During the ’80s, I worked on NYC’s Times Square in the legendary Brill Building. With the “Grindhouse” row of theaters down the block and Times Square being a depraved cesspool of human perversion, my life took on a whole new meaning. Every Friday night after work I’d wander the neon bathed streets in search of a theater in which to gorge my insatiable cinema appetite on the era’s seemingly endless serving of genre fare: “Cannibal Holocaust,” “Re-animator,” “Day of the Dead,” “Demons,” etc. You name it…I was there downing beer and rooting for the bad guys! A musician at the time, I played with a group called “The Proper iD” (the name being a take-off on the Monster from the Id in “Forbidden Planet”). My bandmates were Lach, founder of the Anti-folk scene, and Geoff Notkin, star of Science Channel’s “Meteorite Men.” As a group, we played tons of clubs and had a good run of it. I was also nursing an interest in Japan brought on in part by a rekindled childhood fondness for Godzilla and the wave of Japanese coming to New York during their then economic boom. When the band broke up – Screw it! – I moved to Japan.

In ’98, I finagled my way onto the set of the TV commercial for the Capcom video game “Biohazard 2”. My first film set, it was a sort of life-miracle as it was directed by my hero George Romero. Out of this experience, I got a gig writing for Fangoria magazine, which became my passport into the depths of the Japanese “satsuei gemba,” or movie set. Beginning with the giant turtle epic “Gamera 3: Awakening of Irys,” I set out to learn all I could on how the Japanese go about making films. To date I’ve spent time on over 50 filmsets and, branching off from the reporting, have developed a set of filmmaking skills that I now use as my livelihood.

Working on Japanese movies has been my life’s greatest challenge (well, second, trying to figure out women has been the greatest.) Being on filmsets is something I both love and hate. The days abide by fisherman hours, often starting around 5am, and are long, habitually passing the 24 hour mark. The staff and cast are eccentric, and Japan, being what it is, is a nation of confusing and contradictory rules that if set to print would rival the length of “War and Peace”. Despite this, nothing gets me going more than being on-set, seeing the action, and sharing the camaraderie.

Some of the films I’ve been involved with in one way or another that might be of interest to readers include “The Grudge” series (both Japanese and US), the “Godzilla Millennium” series, “The Machine Girl,” “Tokyo Gore Police,” “Death Note,” “Zombie Ass,” “Dead Sushi” and “The ABCs of Death”.

In any case, I’ll be reporting in here at Monster Blogs when time permits. Feel free to leave comments or ask a question.

I’ll leave you with a few images I’ve taken over the years from various Japanese film sets. 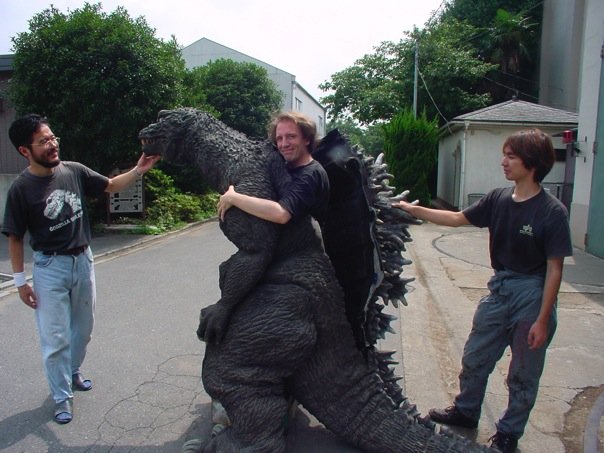 Giving the Godzilla suit a spin at Toho Studios during the production of “Godzilla, Mothra and King Ghidorah: Giant Monsters All-Out Attack”. 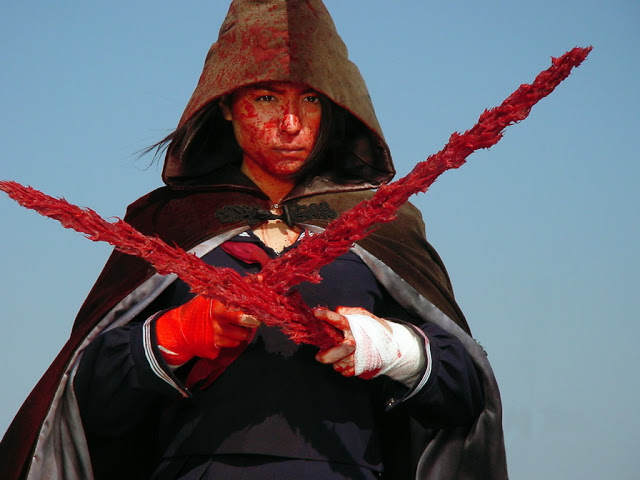 Photo I took during the shooting of the opening scene in “Vampire Girl vs Frankenstein Girl”.

A pensive interlude during the production of the “Biohazard 2” TV commercial. 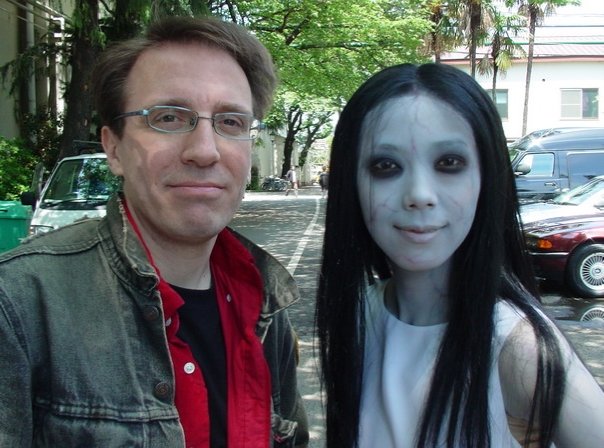 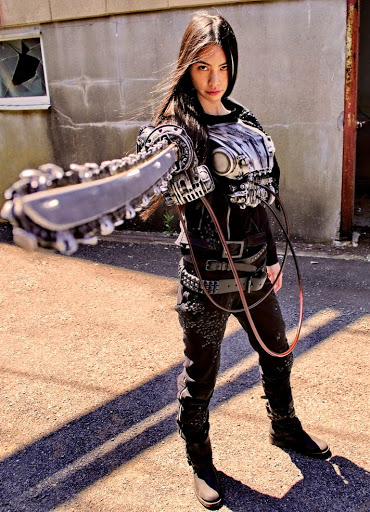 Photo from the first, insane day of shooting on Yoshihiro Nishimura’s “Helldriver”.