Children of the Corn Chips

Hello readers! My name is Anthony O’Connor and I am a writer.

Recently I had the joy/honour/terror of watching a screenplay I wrote get made into a movie. That movie was Redd Inc. (aka: Inhuman Resources for you Yanks and Canadians). I kept a semi-regular diary on the set of Redd Inc. Between setups I’d scribble stuff down. Most of it was illegible, sub-par, rambling and incoherent. Occasionally it was drawings of zombies with boners.

Over the next little while I’ll be bringing you the highlights of this hastily-scrawled journal, with pictures and video for the hard of thinking. This is the first entry:

It’s pants-shittingly scary when your dreams come true. Not the dreams where a clown wearing the face of your mother rapes you, although I imagine that would be unpleasant. I mean your ambitions. The lofty goals that give you the strength to put on pants and leave the house every day… okay, most days.

The year is 2011. I am in a small, poorly-ventilated room where six actors are sitting around a desk, covered in fake blood and scars. They are attached to the desk by chains. There are thirty crew members surrounding them and, standing awkwardly outside this bustling circle, is me.

I smell like corn chips. Sometimes, like now when I’m drenched in sweat, I smell like plain corn chips. There are worse smells, I suppose, but right now I am self conscious of my olfactory aura of snack food.

It is the fifth day of shooting. I am sweat-slicked and sleep deprived. Crew members mill about me in a haze of muttered curses and urgent, barked commands. We’re hours, perhaps days, behind and we still haven’t shot a single kill scene.

We’re due to shoot the death of Guy Marr (played by director, Daniel Krige). MEG are setting up blood tubes, Tom Savini is ready to supervise. The level of tension on set is palpable. This is the moment of truth.

When shooting a horror movie, especially a bloody horror movie like Redd Inc., it’s all about how the executions are, well, executed. I am having one of about a dozen out-of-body moments. I am literally standing on the set of a horror movie I wrote. Tom Savini is supervising the special effects.

I’ve had dreams about meeting this dude since I was old enough to know what FANGORIA was. Since I first saw Creepshow, Dawn of the Dead, Day of the Dead and Friday the 13th. This is literally a dream come true and it looks like it could very well go pear-shaped.

We’re all tired and frustrated. United in the mantra: this shit has to work.

Like, HAS to fucking work. Failure, right now, is not an option.

I’m pretty sure I’m going to throw up.

I look over at Josh Groom (the director of the behind-the-scenes documentary, Chained to the Desk. He’s on set most days, like me). He’s filming the slow motion trainwreck that’s taking place. He glances at me and nods tightly. No reassuring smile. He’s as sweaty and tense as me. I am living a dream-come-true that may well be about to turn into a nightmare.

I’m definitely going to throw up.

Then something strange happens: it all comes together.

Tom Savini takes over calling the beats and the shots. With two cameras filming (three if you count Josh) we manage to capture one of the film’s most difficult setups in one melon-farming take.

MEG are so on the ball, Dan Krige is so responsive and Tom Savini so experienced that it’s one and done! One take to get a complicated sequence where a throat is slit vertically with Nicholas Hope’s (Redd’s) claw blade, then Dan has to bleed out and die on the table in an ever expanding pool of blood.

The crew erupts into spontaneous applause and cheers. A few people groan in delighted disgust at the abattoir floor vibe the desk (or “cubefarm”) set has become.

I sigh in ecstatic relief. My anus and soul unclench. I accept a few sweaty-palmed high fives from crew members and pat people on the back. I’m pretty sure I tell Tom Savini I love him, although I am such a bundle of jangled nerves at this stage I’m not sure anything I say is audible. Or in any language anyone could understand.

This is the first killing of seven. Tomorrow we get to saw Dan’s head off and I will be pumping blood through tubes so his neck stump bleeds, much to the horror of involuntary co-worker Annabelle Hale (Kelly Paterniti). This is the most wonderful and weird time of my life and I kinda never want it to end.

Someone says: “Can you smell corn chips?”

I need to change my fucking shirt.

Lest I be accused of veering into hyperbole, here is the scene in question, introduced my MEG’s Nick Nicolaou and Paul Katte, taken from Chained to the Desk: The Making of Redd Inc. 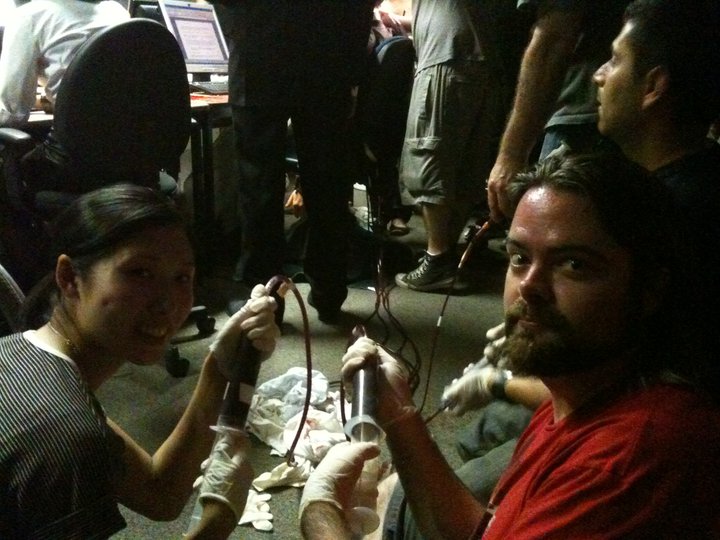 Next time: pumping blood and the birth of Pencil Dick!