In the summer of 2011, I was contacted by Naoyuki Tomomatsu and asked to shoot stills for several films he was directing. Tomomatsu, if you don’t know, is the director of such “classics” as “Stacy” (2001), “Zombie Self-Defense Force” (2006) and “Maidroid” (2008). He also co-directed “Vampire Girl vs. Frankenstein Girl” with Yoshihiro Nishimura, a film I adore and one that is dear to me as it was my first professional subtitling gig.

So, Tomomatsu calls me…
“Can you do stills on my new films?” he asks.
“I only have time to do one,” I answer. “What are they?”
The first title he mentions has vampires in it.
“No frickin’ way,” I snap. “Vampires have become the domain for idol worshipping teen girls and lonely middle-aged moms.”
The next title has zombies in it.
“Hmmm… I’m not quite as sick of zombies.”
“It stars Asami,” Tomomatsu adds.
“Asami? I’ll do it!” 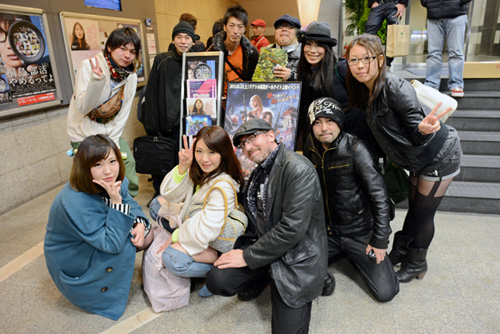 Hanging with the cast before the screening

To be honest, I had an ulterior motive. I was getting ready to shoot a film of my own (“New Neighbor”) and wanted Asami to play one of the leads. Going to the set would be a good chance to approach her. Asami, for those who might not know, is one of the cult queens of Japanese genre cinema and has appeared in movies such as “Sukeban Boy” (2006), “The Machine Girl” (2008), and “Dead Sushi” (2012).

To cut to the chase: I went to the set, took photos, got Asami to be in my film, and even made a “behind the scenes” video that appears on the film’s DVD. I shot it on a lark with some crappy handheld video camera my assistant had on him. If you care to waste 3 minutes and 41 seconds of your life, someone uploaded a condensed version of it to Youtube:

Behind the scenes on Lust of the Dead

Maybe you’ve noticed I’ve hesitated mentioning the title of the film. That’s because it goes under the politically incorrect title of “Rape Zombie,” the film’s zombie gimmick being men turn into creatures with a craving for the carnal. The first thing I did was to make Tomomatsu change the English title to “Lust of the Dead”. I don’t know if it’s the finest title I’ve ever come up with but I figure it’s better than “Rape Zombie.”

In the fall of 2012, I was asked once again to do a “behind the scenes” video for the sequels. I was hesitant. You have no idea what hell is like until you’ve been on a Tomomatsu set. The main day of shooting on the first one went on for 35 hours without a break. We were in deep, mosquito filled woods close to Mt. Fuji and there was no food to eat until the morning when we were each given a single McDonald’s hamburger. It didn’t even have cheese on it.

I’m not going to get into the details of the LOTD 2 & 3 shoot, but I basically limited my set time to 2 and a 1/2 days. It was supposed to be longer, but when I got to the main location I found out it was the same place I’d worked on Yoshihiro Nishimura’s “ABCs of DEATH” entry. An abandoned school, it is so filthy you can actually feel the bacteria entering your lungs with each breath. I was supposed to stay until the next afternoon but opted for the midnight bus home with the female extras. Still, I managed to get decent set photos and, this time tackling it with proper video equipment, made one hell of a “behind the scenes” video.

To be honest, I had a blast at the LOTD screening the year before. It was a sellout crowd and all the actresses were there. They even had a group sing along that went something like, “Rape! Rape! Rape! Yeah!” sung by all the women in the film. I’ve seen bizarre things in Japan over the past 20 years, but this one was a new one on me.

The new films star an even bigger boatload of actresses and nearly all of them turned out for the premiere, which made backstage an enjoyable place to hang out. Of all the actresses in LOTD, my favorite is Saya Kobayashi. Saya has an adorable face and one of the perkiest personalities around. She speaks passable English, too, which gives us the chance to joke around without being understood by anyone.

Last month, 23 March 2013, saw the premiere of LOTD pt2 and pt3 in a single film called something like “LOTD: Akihabara Version” (it being pts 2 and 3 put together into a single version; the film comes out on DVD in Japan next month). It was a one night screening in Shinjuku starting at 12:30am. Tomomatsu being what he is, called the night before to invite me. Ironically, Asami was over my place doing voice over work for my film when he did. 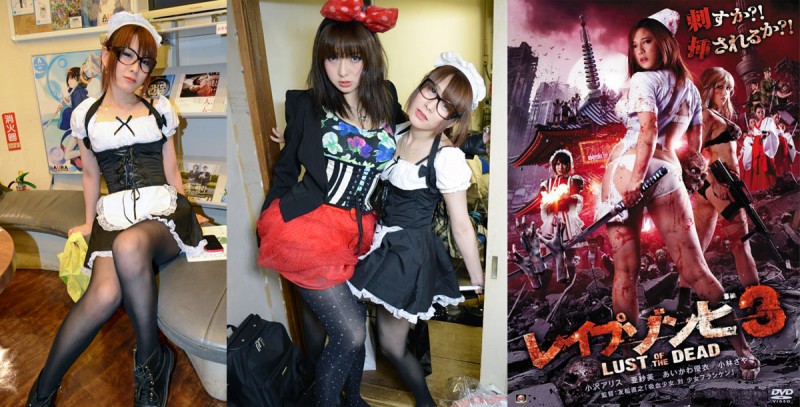 Saya Kobayashi, Arisu Ozawa, and the Lust of the Dead 3 poster

While I’d like to comment on the film itself, I couldn’t take it past the opening title sequence. Instead, I joined Saya and co-star Arisu Ozawa for some late night ramen in a Shinjuku back alley. An hour and a half later, we were back at the theater in time for the “butai aisatsu,” or stage greeting. After forming a long line along the stage, each actress and actor offered some tidbit of information about the film or its director. Don’t expect me to remember what was said. It was all pretty unmemorable stuff.

Quite possibly the funniest moment of the evening was backstage when Arisu and Saya were signing “Lust of the Dead 2” and “3” posters backstage, something Tomomatsu forces all the actresses to do so he can make a few extra bucks on the side.

Saya, fed up with the large pile of posters, started scribbling her name. When Arisu saw this she yelled, “Hey! That’s not a signature! That’s graffiti!” Without missing a squiggle, Saya said, “the quality of my signature is equal to the quality of the movie!” The three of us roared with laughter until Tomomatsu came back to see what the ruckus was.

“I guess you’d have had to have been here,” I said as the girls snickered under their breath. 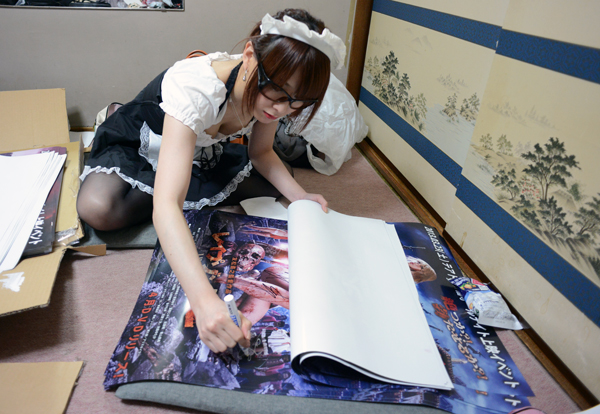