Poking around the Monster Pictures website I see they’ve recently released “The ABCs of Death” onto DVD and Blu-ray. For those of you who have been locked away for the past year and don’t know what this is, “ABCs” is home to twenty-six horrific short films, one for each letter of the English alphabet, and made by filmmakers from around the world.  The unifying theme of the shorts being everyone’s favorite subject: death. Three of the twenty-six segments were made in Japan and were directed by Yoshihiro “Tokyo Gore Police” Nishimura, Noboru “Machine Girl” Iguchi, and Yudai “Dead Ball” Yamaguchi.

Early on in the production, associate producer Marc Walkow contacted me and asked if I’d shoot stills and put together “behind the scenes” video segments for the Japanese entries. I liked the concept, I like the directors, cast and crew, I also really like shooting set stills and making “behind the scenes” type videos. Plus, I figured that as a non-Japanese familiar with Japanese film sets, I was the best guy to convey these sets to the intended non-Japanese audience. How could I not wholeheartedly accept the gig?

“F is for “Fart”
The first production up was Noboru Iguchi’s “F is for Fart,” which went before the camera on 28 October 2011. We had to get to this ASAP because Iguchi’s next feature, “Dead Sushi,” was set to start shoot just two days later! (I did stills on that one as well.)

The “F” production took place at a school on the west side of Tokyo. That is, I guess it was a school. It had a school sports field on one end and what looked like faculty buildings on the other, but there were also strange “Hobbit” homes lumped throughout the greenery of the area that you’d never see at a real school. Although it might not seem like the kind of place, Japan has its fair share of bizarre religious cults and this place reeked of it.

The “F” shoot can be broken into three sections. First were the early morning shots of star Arisa Nakamura viewing a large Japanese gate (which was added in via CG later on. FYI: Temple gates don’t grow that large in Japan!). Following this were the flashbacks of Miss Yumi (played by Iguchi regular Yui Murata) and finally the high school girl running with her head on fire.

The second section would be the street scenes of an earthquake striking and Arisa being caught “cutting the cheese,” an effect that was actually quite difficult to achieve. It took at least two dozen attempts for the production manager to get Arisa’s skirt to blow skyward as if she had released a blast of fowl smelling gas. Several of these I included on the “behind the scenes” piece for “F”.

The “F” shoot ended production in the room into which Arisa and Yui escape the quake. So, there I am, in one of those bizarre structures in the “school” fumbling with my cameras while director Iguchi is instructing Arisa on how to beg her teacher for a fart in the face. I’d like to say this was shocking or I found it perverse in some way, but after twenty years in Japan and fifteen years on its genre film sets this kind of thing is pretty much par for the course.

“J is for Jidai-geki”
Directed by Yudai Yamaguchi, the “J” segment was shot on November 25 2011 at a small temple not far from the Pabaan office in Northern Tokyo. (Pabaan being the company shared by directors Iguchi and Nishimura, CG artist Tsuyoshi Kazuno, and special makeup artist Taiga Ishino).

The actor playing the executioner was Takashi Nishina, who I first met back in 2001 on the set of the Shusuke Kaneko film “Godzilla, Mothra and King Ghidorah: Giant Monsters All-Out Attack”. Over the years we’ve meet on film sets and at film events, but 2011 turned out to be a peak year in our working relationship. I think we did five films together that year including my latest film “New Neighbor” in which he plays a sexually aggressive company president (sorry for the shameless plug). “You again?” was our running gag greeting that year.

Taking stills was tough because I was wanted to get shots that made Nishina and the samurai actor, Daisuke Sasaki, look like they were in old Japan. While the temple looked old school at a glance, temples today are stocked with little 21st century telltale items such as electric wires, outlets, TV antennas and metal garbage bins that pull them firmly out of the 15th century.

Probably the most out-and-out fun during shooting was talking about Italian prog-rock group Goblin with director Yamaguchi. Goblin had just done their first show ever in Japan and both of us were gushing over the show.

A typical on-set conversation between the two of us went something like this:

Yudai: Wasn’t that version of “Roller” intense?
Me: Sure was, but Massimo Morante’s guitar solo on “Phenomena” was lame. I guess he’s too old to play it like on the soundtrack.
Yudai: You noticed that too! I was thinking… Oh wait, hold on… Camera! Ready! Action! …. Cut! Can we do it again with a little more perspiration running down Nishina’s head? …. You know, I really wished Goblin had played something from “Contamination.”
Me: Yeah, but Simonetti wasn’t in the band for that one.
Yudai: Oh, that’s right. I forgot…

In spite of our conversations about Goblin, the scenes at the temple managed to reach completion.

Filming wrapped at Pabaan with the close-ups of Sasaki’s face contorted and his eyes floating about. This gave the crew trouble and it took a bit of fidgeting with the eyes to get them to move as Yamaguchi wished. One thing I noticed on set was that Sasaki’s bizarre facial appliance looked more like makeup artist Taiga than the actor. “Yeah,” Taiga admitted. “I sculpted it while looking at myself in a mirror.” Hahahaha. I love working with these guys!

“Z is for Zetsumetsu”
“Z” was the last to go into production and was by far the most difficult of the Japanese lot to make. Whereas the first two had linear stories, “Z” was a surreal piece of great ambition. Besides, this is director Nishimura we’re talking about. Not only is he one to push himself to his physical and mental limits, but his crew as well. Looking at the storyboards beforehand I knew we were in for a hellish shoot.

The filming of “Z” started  on the morning of 16 December 2011 in a rundown, abandoned high school somewhere in the Mount Fuji area. This school – an oft-used location for low budget Japanese horror films – is a dump. Wires hang from missing panels in the ceilings, half the toilets are missing or busted, and there are buckets on the floors to catch rain leaks filled with moldy green water. To say I hate this place is an understatement – but I went off on that in my last blog entry as it’s the same place where “Lust of the Dead 2” was filmed.

“Z” started off in the dingy basement of the school with the “Dr Strangelove” takeoff scenes. As if things weren’t filthy enough, Nishimura had it pumped full of “smoke”. Right away the mold clinging to the walls took advantage of this moist carpet smoke ride to travel into the deepest corners of our lungs. And as if that wasn’t enough to raise the crew’s tension, Nishimura started yelling about there being a lack of “atmosphere” to the scene and that the crew wasn’t properly prepared. Or something like that. As anyone who has ever worked with Nishimura knows one of his things is to keep everyone second guessing. One moment he’ll be laughing and the next he’ll be screaming until he’s red in the face (or is that the set blood?). Although I don’t think I would ever employ his filmmaking methods in my own movies, I find his way intriguing and stimulating, and as odd as it might sound, I’m always happy to be on his set. 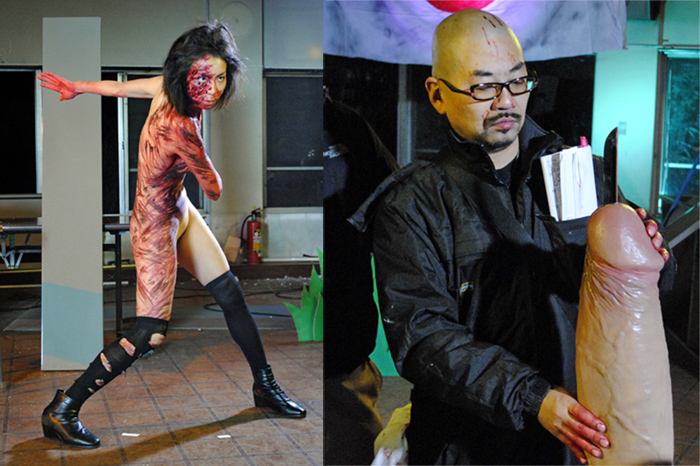 So why the showing of male / female private parts? It’s because Nishimura saw an opportunity in ABCs. He was hell-bent on “making a film that could not be shown in Japan” is what he said to me during a pre-production meeting. It wasn’t just in the genitalia shots, but in the whole attitude of the film, right down to the making fun of the emperor. Don’t get me wrong. Japanese are great believers in free speech, just keep the issues to things outside of Japan.

The body of the film was shot in what must have been the school’s cafeteria, which, as noted by my observant assistant Radley Silla, is where part of “Big Tits Zombie” was shot. If you’ve seen the film, it’s the room in the opening scene when Sora Aoi and those other porn actresses kill a bunch of ketchup-faced zombies. “Radley! You’re right!” I exclaimed. “This is where they shot that piece of shit film. Are we really standing on ground made hallowed by the obnoxious, gravel-voiced Sora Aoi? We must be the envy of the entire male population of China now!” After working on three of theses ABC “behind the scenes” videos with me, I like to think that Radley is by now used to my overt sarcasm.

The big crisis of the day was that the “9/11” and “3/11” tattoos for Je$$ica’s breasts and buttocks were left behind in Tokyo. Nanae Yoshida, the film’s assistant producers, spent the day in a mad search for a local shop that could print them out as rub-on tattoos. In the end, she found a place that could, but only backwards. If you watch the “behind the scenes” for this piece you’ll see that the tattoos are reversed.

The last shot was when actress Kurumi Ochiai gets a sword shoved into her womanhood. In typical Nishimura fashion the blood was pumped from a large bucket and flew about the set hitting everything and everyone. Once it was over the odious task of clean up began. You might not believe it, but the easiest way to wipe up blood stained floors is with diapers. Breaking out a case from one of the production vans, we spread dozens of white diapers around the floor, letting them soak up the crimson dye. Following this we had to sweep up every last grain of rice that had been blown throughout the room. By the time we were done the sun was well over the horizon.

Despite the long hours, the three “ABCs of Death” episodes were great experiences and a terrific opportunity for me to hone my “behind the scenes” filmmaking skills. I hope readers of my blog here at Monster Pictures will be able to not only watch “The ABCs of Death” film, but also my trio of “behind the scenes” featurettes that I busted my butt to make! (As a side note, I believe that only the special edition of ABCs will have “making of” featurettes.)