Zombie Babies: On Set of ‘The Crawling Dead’

Hello, my lovelies, and welcome to my Monster blog, Pretty Brutal! Allow me to introduce myself properly. My name is Bianca Barnett, and I am an American actress, model, and host of the campy retro horror review show, Watch These Films with Bianca Barnett. Some of you may be familiar with my work in the films Albino Farm, My Sucky Teen Romance, and The Evil Inside. I was honored when Neil asked if I wanted to be a part of the brilliant community of freaks, weirdos, and horror fans here at Monster Pictures. I mean, really, how could I say no to such an amazing opportunity? 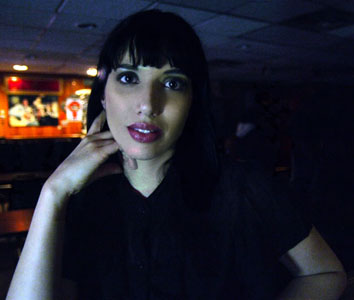 Hello, lovelies! How do you do? My name is Bianca Barnett.

With the recent explosion in popularity of the undead via the popular series, The Walking Dead, a newfound fascination and obsession with all things zombie has risen. Zombies have shambled their way into the mainstream and people cannot seem to get enough of the putrid brain-munchers. Mass organized zombie walks, Thriller flash mobs, zombie proms, the list goes on! Hell, even Jeopardy had a “zombie” category.  A trip to the local bookstore reveals an entire section devoted to the undead- cookbooks, games, comics, stuffed toys, and more. Not to be left behind, Hollywood is cashing in on the zombie genre craze with movies like World War Z, Warm Bodies, and even the kid friendly, ParaNorman.

The zombie movement seems unwilling to croak. So, how do you breathe life into an oversaturated genre? What if the tame mainstream is just not your thing? Well, why not try something so utterly twisted and gloriously distasteful that Hollywood wouldn’t touch it with a ten foot pole? Why not zombie… babies? 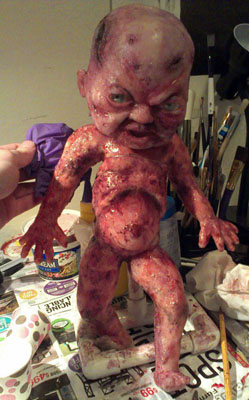 Enter The Crawling Dead, a quirky combination of dark humor and grisly horror, not intended for the politically correct. (The tagline is, “A web series about abortion, zombie babies, immortal rednecks, and explosions.”)  The film sprang from the deranged minds of Eamon Hardiman and Missy Dawn, founders of Razor Sharp Studios, which burst onto the scene by bringing fans horror schlock like Catholic Ghoulgirls, Vampire Whores from Outer Space, and Porkchop 1, 2, and 3D.

Written and directed by Hardiman, The Crawling Dead follows expectant couple, Eric and Rachel York (Elvis McComas and Lindsey Davis), as they move into their ideal home. However, the couple soon uncovers evidence that their dream home actually has a very disturbing history and that their landlord, Burt Fleming (Brian Gunnoe), is not who he appears to be. 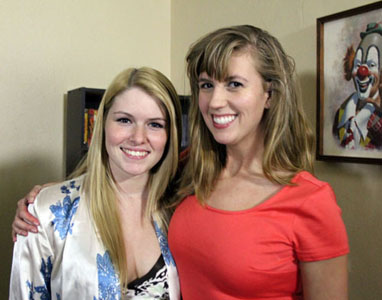 So, just how did I get involved in the project? Last spring, Razor Sharp contacted my husband/manager, Michael Kyne, to ask if I would be interested in making a cameo in their latest endeavor. The Crawling Dead was shot in beautiful Charleston, West Virginia in the valley of the majestic and mysterious Appalachian Mountains. For my part as Marjorie in the film, Michael and I met the crew at the world famous dive bar, The Empty Glass. The tiny space was filled to the brim with a cast of excited extras and a friendly and professional crew. Hardiman asked if Michael wanted to make an appearance in the film as a patron at the bar that couldn’t resist pestering me. The scene was shot from several different angles, each requiring different camera and light placement.  Since the Razor Sharp crew was so experienced and professional, setting up took very little time and we flew through filming. I was even the chance to improvise a word or two, which is always a pleasure as an actor. 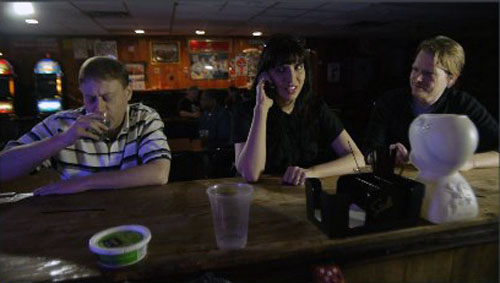 Missy Dawn- who wore many hats on the film as actor, producer, and production manager- had everything organized so well that filming went off without a hitch. I must say that working on The Crawling Dead was one of the most pleasant filming experiences that I have had and I look forward to collaborating with Razor Sharp Studios again in the future. 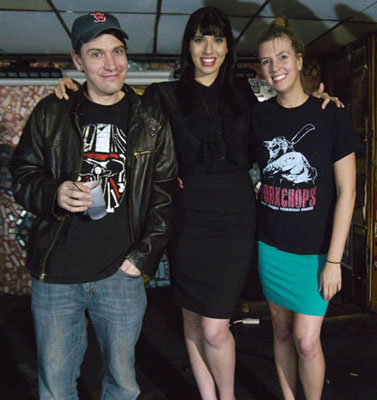 Check out Razor Sharp Studios’ website for more information about all of their films. You can watch the first season (five episodes) of The Crawling Dead for free online. The second season will pick up this October, but you can be ahead of the crowd and order the entire film on Blu-ray and DVD (packed with babies, boobs, and blood) at the official website!