Check out some news for EVIL FEED including a trailer!

Hey Gorehounds, lucky you as we have some fresh meaty tidbits to appease your carnal horror hungers.

First though, all of us here at Monster, along with the legion of Aussie fans would like to give Ryan Nicholson (GUTTERBALLS, HANGER, LIVE FEED) a huge arsed Happy Birthday today and we are pleased to be among the first to let you in on some new Nicholson news.

A press release has just been issued about a new Martial Arts horror called EVIL FEED. This is based on an original story by Ryan Nicholson, EVIL FEED was helmed by stunt coordinator turned director, Kimani Ray Smith. 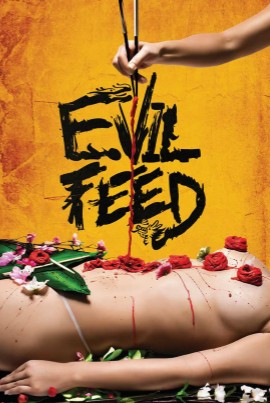 The film follows a group of young martial artists who infiltrate an underground pit fighting ring where the loser is chopped up and served as gourmet dishes in the adjoining restaurant.

This also has Tracey Lai from LIVE FEED, who provides the FX here, she is a mentor of Ryan too. This is too be released later in the year hopefully but here’s a new Trailer to wet your appetites.

This is a mock commercial for The Long Pig Restaurant featured in the film enjoy.