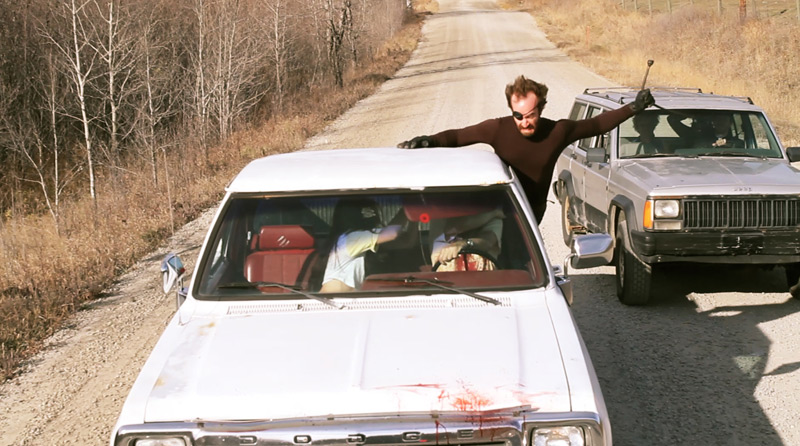 FATHER’S DAY is over the top, tasteless, senseless, and completely hilarious… this is a level of depravity rarely achieved in cinema.” – Ain't it Cool News

The Astron 6 mayhem continues with this tale of a daddy-defiler by the name of Chris Fuchman and his nemesis, a one-eyed vigilante named Ahab, who had his own male parent snuffed by the Father’s Day Killer. A hit at festivals across the globe, FATHER’S DAY is pure grindhouse madness and is brilliant on every level! See it on the big screen with an audience. And remember… Lock up your Fathers!

A few years back Winnipeg filmmaking collective Astron-6 produced a trailer for a feature idea they had called FATHER’S DAY. Soon enough Lloyd Kaufman came sniffing around and before long they hooked up with Troma to produce a feature length version of the film – FOR 10 THOUSAND BUCKS!!

Low budget films come and go but this film is proof positive that brilliance can be achieved on next to nothing. The performances from the Astron 6 team are universally top-notch, the score is amazing, the production design awesome, wardrobe is spot on, as is make-up, effects, stunts etc. It’s gory, sick and twisted yet utterly hilarious – this film seriously has everything! Make no mistake, FATHER’S DAY is one of the finest films of the last bunch of years – big budget, small budget, no budget, whatever! Mark my words – YOU ARE GOING TO LOVE FATHER’S DAY.

Astron 6 are one of the most exciting filmmaking teams on the planet at this point in time – this film has been scooping up awards all over the world and here is your chance to see why – where else will you see Lloyd Kaufman playing God and Satan not only in the one film, but in the one scene? SERIOUSLY PEOPLE THIS FILM IS UNMISSABLE!